The Natural World of Saint Francis of Assisi.
Landscapes, Plants, & Animals that Saint Francis Knew and Loved.
Arizona's Scenic Seasons
Season-by-season in Arizona, another gorgeous book from Arizona Highways!
100 Common Wildflowers of the Tallgrass Prairie
A field guide with notes on natural history.
The Flower Clock - Work in Progress
What Wild Plants Tell Us About Time. (Work in Progress)

I was born in Palo Alto, California, but moved often with my family to such far-flung places as Kodiak Island, Alaska, and Wiesbaden, Germany. Drawn to the loveliness and the literature of the ancient world and intrigued by how closely pre-Socratic philosophers observed nature, I earned a B.A. in Classical Civilization at UC Santa Barbara and an M.A. in Aegean and Anatolian Prehistory at Bristol University in England. I served as a ranger-naturalist in the National Park Service for seven years; my last assignment was as Desert View District Ranger-Naturalist at Grand Canyon National Park. The Desert View District borders the Navajo Nation and my work there was to interpret the pre-Columbian and modern indigenous peoples of the Colorado Plateau, particularly the Hisatsinom and the Hopi. It was here that my love of nature and science, and my appreciation for diverse cultures converged. A chance assignment led to a freelance career writing interpretive natural and cultural histories and leading study tours in the West for the Smithsonian National Associates Program and other clients.

I now live in Flagstaff, Arizona, with my husband, photographer Tom Bean. I write books and essays, teach workshops and classes, present illustrated talks, create small exhibits, lead an occasional field trip, and keep an almanac of two hundred wildflower species in the woods around my home. My writing, community work, friendships, and faith are interconnected in a way I would never have imagined possible. 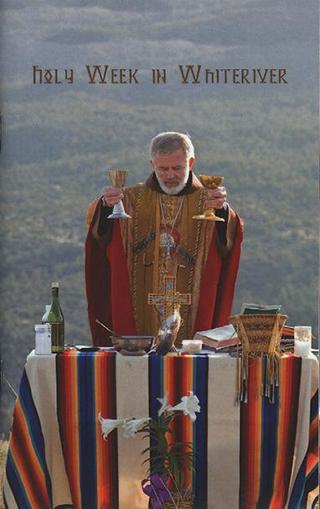 Click cover to send for Holy Week in Whiteriver

Writing is a way to support those we love and admire. Tom and Susan produced this little book to raise awareness of the White Mountain Apache parish of our friend Father Eddie Fronske, OFM.